The elements of any creative endeavor are what makes the end result fascinating or maybe, just, nice. As the texture of a painting makes it alluring so does the texture of wire craft with various stones. The rough and refined create a balance of character that brings two opposite personalities into harmony.

Fossilized coral, or more properly, agatized coral, is a piece of coral that over the course of millions of years becomes agate through a process of replacement of the organic material. The above agatized coral is considered gem grade due to the crystal druzy embedding the surface. The grey undertone allows the yellow sparkle of the lemon quartz to stand out. These pieces will be bound together using sterling silver wire and maybe some gold-filled wire. What is gold-filled wire? That’s for another post. Until next time when I finish this rough and refined piece. 🙂

I had this idea and it came to fruition. I love art and I do a bit of painting on the side. It is a relaxing way for me to express myself and it is through the concept of painting and framing a picture that I wanted to “frame” a pretty little faceted stone. With a nice squarish piece of fossilized coral that had a perfect white background with a bit of sparkle, I added a faceted lemon smoky quartz to dangle in front of the “frame” – this came out more eye-catching than what I had imagined in my head. It’s unusual to have that happen. Typically, I have a hard time achieving what is drawn in my head and I accept the changes and adjustments that some designs require. This one surprised me.

There is a public exhibit getting ready to take place in my local town of Fayetteville, North Carolina. It is an open, non-juried exhibit which I appreciate so much. This enables all kinds of people who have creative abilities the opportunity to show their work. I am always surprised at the talent that comes out. So, the “Floating Lemon” which is what I am naming the piece is going to be exhibited for about a month and if it does not sell then it will be placed within the walls of my Etsy store. Fingers crossed. Pricing is at $130.00 with a gift box included.

Bloodstone or Heliotrope is a variety of Chalcedony. Chalcedony is a microcrystalline quartz. From the Handbook of Rocks, Minerals and Gemstones by Walter Schumann, Bloodstone is an “Opaque, dark green variety of quartz with red spotty inclusions.” These stones are found predominately in India, Brazil, Madagascar, Namibia and some areas of the USA.

Legend has it that the red spots of the Bloodstone were thought to be Christ’s blood. This stems from the Middle Ages and many things became folklore from those days. According to some metaphysical references, the stone is thought to carry an energy of Christ consciousness.¹

In one of my latest designs, I use a tumble-polished freeform of Bloodstone as the centerpiece, along with Herkimer Quartz and Swarovski crystals. The long, twisted weaved bail is an exciting aspect to the design. It is representative of structure similar to DNA. The necklace is made with beading wire and assorted beads such as, Tiger Eye, Mook Jasper, Bloodstone and Garnet. 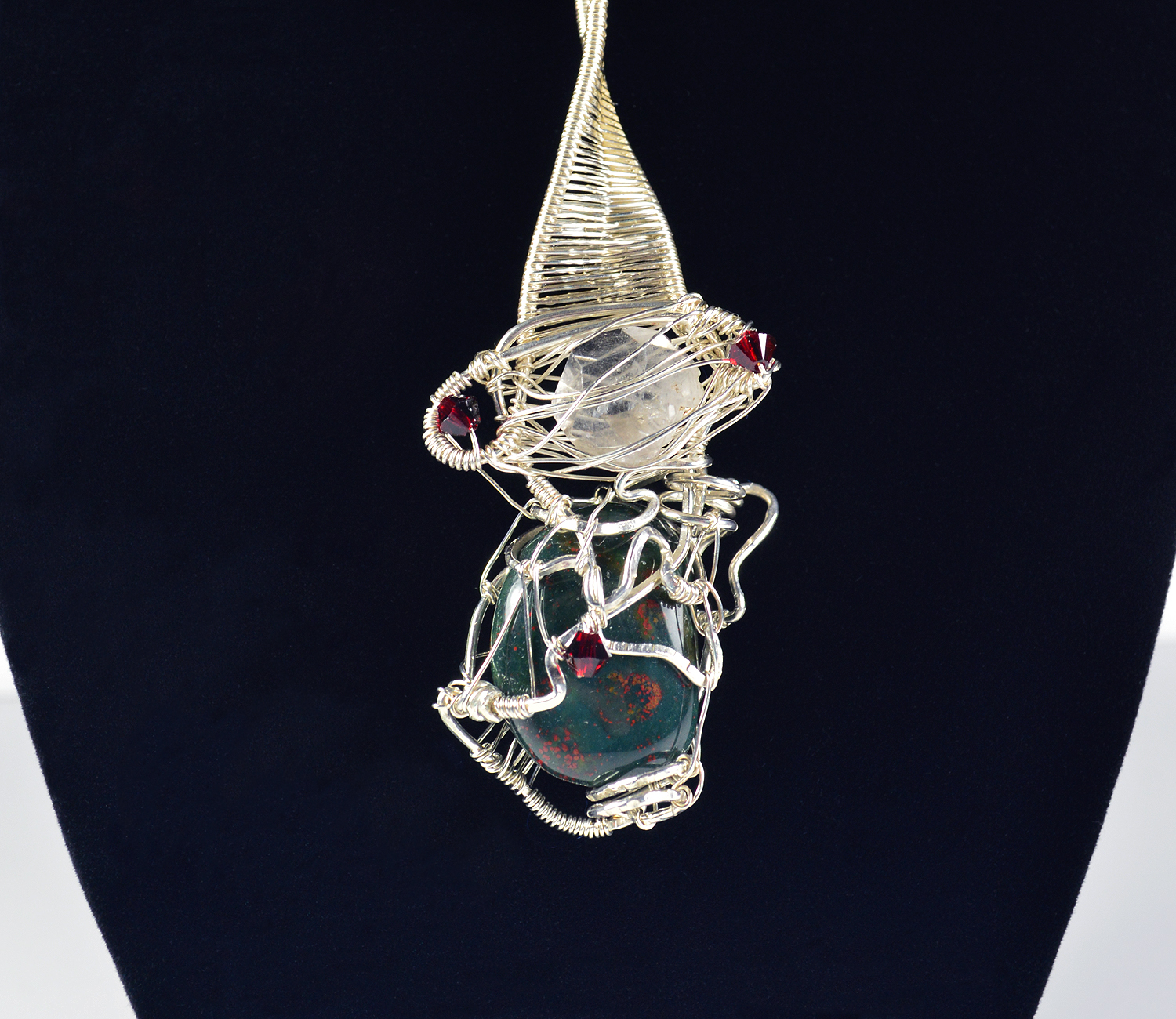 Check out the listing in my Etsy store: https://etsy.me/2Bztrlo

Just finished a design that I am very happy about. It is a pattern that I will repeat and I am calling it the Roller Coaster Weave. It is my new template for bead rings. I have been wearing this ring today and I am in love with it!

Rainforest Jasper (Rhyolite) is a beautiful and fascinating stone to look at. It is volcanic material formed by the process of heating and cooling in the magma or lava. It contains quartz with a composition very similar to that of granite. It is mined in the United States, Australia, Brazil, Canada, Russia, Mexico, India, Venezuela, Uruguay, Madagascar, Egypt and other parts of the world. Every area has its own version and appearance that makes it unique to that particular place.

For those who follow the metaphysical practices, Rainforest Jasper connects one with the earth and is helpful in connecting with nature and emotional healing. Its energy is known to invigorate and add to one’s positive attitude in the enjoyment of life.

Check out the listing in my Etsy store: https://etsy.me/2RcFOu9

Astrophyllite – it’s not a baseball team. Sorry to disappoint the sports fans. It is a mineral with a mix of potassium, sodium, iron, manganese, and titanium. The wonder and beauty of minerals is the whole gourmet mix! Minerals are my specialty. I love them because they are not the typical items you find in commercial jewelry stores. I work with gemstones too, but, the mineral world is just as beautiful and eye inspiring and doesn’t get the attention is so deserves.

This special mineral is found in the USA, Greenland and Norway. The most precious material is known to come from the Kola Peninsula of Russia.

For those who like to know about the metaphysical stuff, this complex mineral has been noted to have the energy to assist one in self-acceptance, self-knowledge and forgiveness.

In this piece, is my weave style of wire wrap using traditional copper wire along with a bronze color copper wire. The wire is sealed with a clear lacquer to prevent tarnishing. The beads are sterling silver with silver wire and dyed, faceted Jade beads.

This piece is currently listed in my Etsy store. 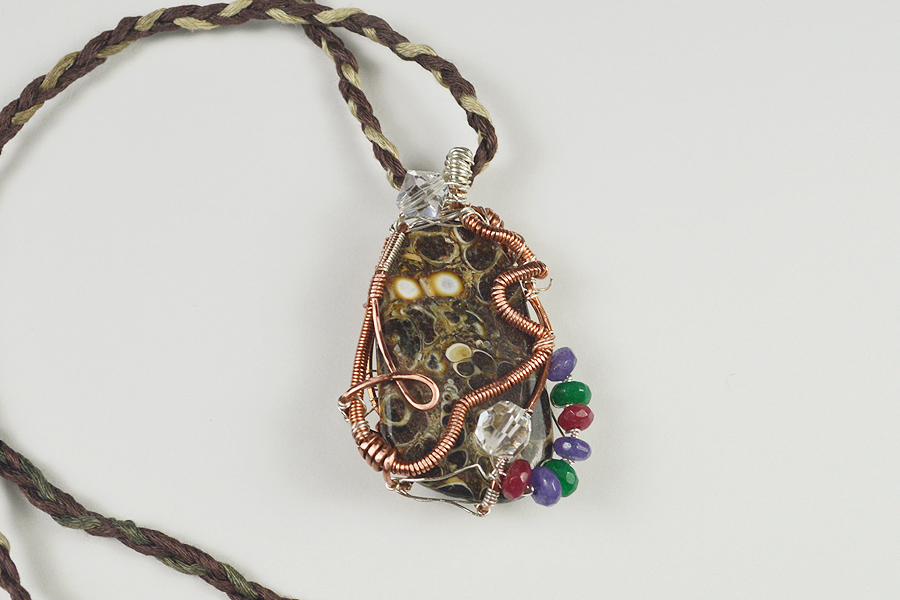 This piece is listed in my Etsy store

Turritella Agate or Turritella Fossil is what this stone is usually called in the “market” and by “market” that means the jewelry makers and gem and mineral wholesalers. This name is actually incorrect. When it was initially discovered this material was thought to be the spiral-shaped gastropod (snail), turritella. What it really is is a freshwater snail called, Elimia tenera, which belongs to the Pleuroceridae family.  The photo below shows the actual turritella (fossil shells). Personally, I wouldn’t know the difference but, what makes it important is that elimia tenera is extinct. The turritella is still found along the coastline of beaches. 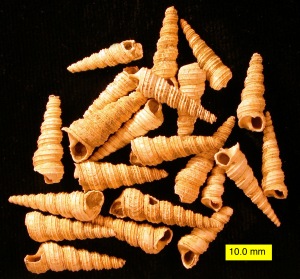 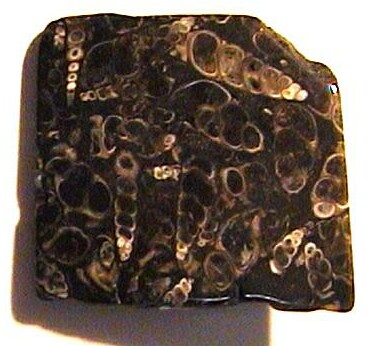 Photograph of a belt buckle made from chalcedony with fossilized Elimia tenera shells (formerly Goniobasis tenera and incorrectly Turritella) from the Eocene Green River Formation, Wyoming, USA. Belt buckle made and photograph taken by Thaddeus P. Bejnar, in the workshop of Waldemere Bejnar.